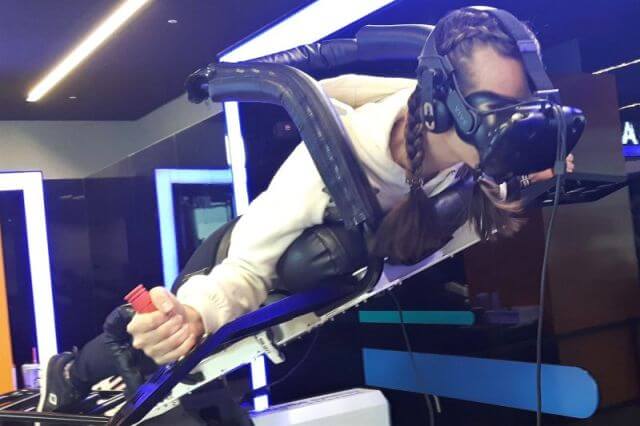 Gaming chairs have become a huge business. Multiple manufacturers are releasing multiple models onto the market, seemingly on an almost daily basis. Manufacturers aren’t stupid, there is a reason that this upsurge is happening, the marketplace for them, like all things gaming and esports, is expanding at a huge rate.

Gaming chairs have become a must-have for gamers the world over. They are designed to be comfortable and ergonomic, they are fitted with padding where a gamer needs it, and they are pretty cool to look at.
From the first gaming chairs in the 80s, which actually weren’t really gaming chairs at all, to today’s gaming chairs, a lot has happened both in design and in quality.

The market seems set to continue growing into the foreseeable future, and with increasing competition manufacturers are striving to be first with the next big feature or killer design. 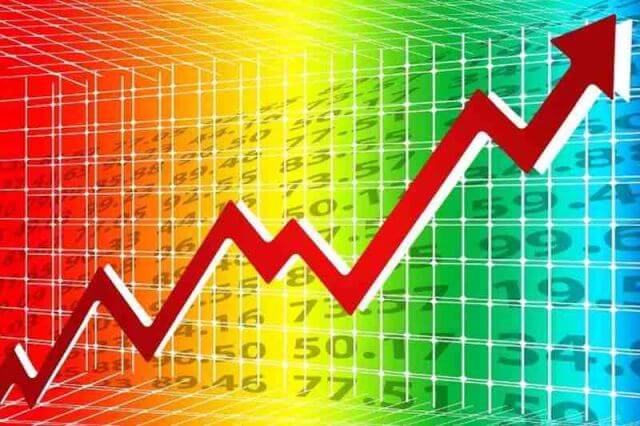 In 2020 the video game industry is reckoned to be worth a breathtaking $160 billion, this is up almost 10% on the year before. There may be external reasons for this massive annual growth, but it is only an acceleration of a phenomenon that was already established. The gaming industry is one of the few industries that haven’t just survived the global pandemic but instead have thrived.

With the introduction of social distancing and lockdowns and the cancellation of concerts, events, and holidays, a massive percentage of the global population was forced to spend much of their time indoors at home. Many of these people turned to games to fill the hours, and many changed from casual to serious gamers.

Gaming is an escape, and the world needed an escape, so the world turned to games more than to any other form of entertainment. This year the games industry revenue has surpassed the box office/movie industry turnover by over 4 times and surpassed the music industry by over 3 times.

The figures for esports are just as staggering. Even though the pandemic caused the cancellation of many live events the figures are still impressive. The esports industry is estimated to have a revenue of over $1 billion in the current year. This is expected to grow to over $1.5 billion by 2023.

The viewing figures are even more remarkable, this year the combined global audience for esports was 495 million. Despite the lack of live events, the audience continues to grow and that infers that when the pandemic eases the market is set to explode.

The future of gaming chairs and the future of gaming and esports are inextricably linked. As sales and interest increase in one field, the other will follow. Gaming has been with us for years now but overall is still considered a young industry. Compare a game from ten years ago to a modern game, there is no comparison, it is an industry that is expanding in technology and scope year on year. And where it goes the gaming chair will follow. 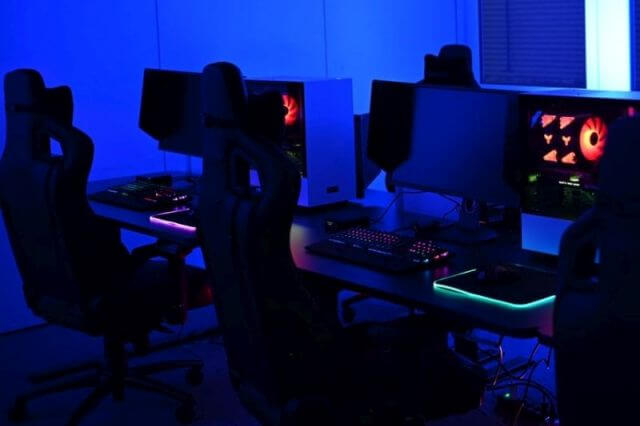 So, what is the market growth outlook for gaming chairs?

While the gaming market does not show any sign of its growth slowing any time soon, it is easy to say that the gaming chair market will do the same. But there are differences.

New hardware platforms, new game releases, add-ons, subscription fees, the list goes on. The revenue streams for games are multifold, this is part of how the gaming industry maintains such healthy year-on-year revenue growth.

Chairs are more of a one-off purchase. While buying an add-on pack for a game or purchasing a new version from steam, individual costs for such items could be as low as a dollar. These are small expenses when compared to shelling out on a new gaming chair. And that brings in the next point, a good gaming chair will last for years, and will still perform adequately without the need for add-ons and upgrades, and replacement graphics cards. On the whole, gaming chairs are built to last.

To expect the same growth levels as that of the gaming and esports industry is not a level playing field. But that isn’t to say the market isn’t healthy or saturated. Far from it.

In 2020, even with unemployment rates soaring and an uncertain future the gaming chair market worldwide still showed an increase of $95 million over the previous year. And market forecasts show a predicted increase of 5% annually for the years 2021 through to 2024.

This is promising indeed, and why manufacturers are striving for as big a chunk of the market as possible. If you’re considering buying a gaming chair the current scenario of a rising market full of competing manufacturers means it is currently very much a buyer’s market. 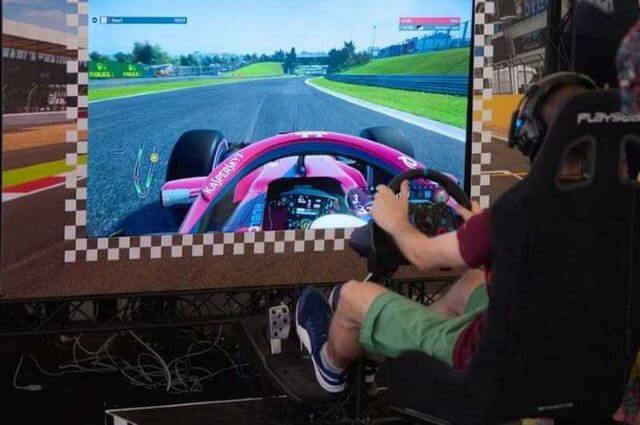 When is the Market Saturated?

It is difficult to say exactly when the gaming chair market will be saturated. But it is unlikely to be any time soon. The ever-growing list of manufacturers entering the sector is evidence of its current health.
However, that is not to say the market is always going to be quite as healthy. Gaming chairs aren’t cheap, even for a good lower-end chair you won’t get much change from $500, and that is a low-end chair remember. Markets like that are very dependent on the overall health of the world economy. In a major and long-lasting economic depression, a gaming chair will quickly go from being a must-have to an unnecessary luxury.

But even though we could be considered in such a situation currently, the fact that analysts still predict growth for the gaming chair market until at least 2024, it is reasonable to conclude that the saturation point is still somewhere in the mid to distant future.

Of these regions, Asia Pacific is anticipated to dominate the market in terms of growth, due to the increasing popularity of internet games and growing demand for PCs. However, North America and Europe are expected to lead the gaming chair market due to modern technologies and the purchasing power of people, in terms of overall spending.

This suggests that saturation in one market will not necessarily result in worldwide saturation.
To summarize, the market will have a saturation point, and much of when that is reached will depend on global circumstances, global and local economies, and the cost of the chairs.

In the not-so-distant past a few adverts on the television, an advert or two in the press, and some billboards would have constituted a marketing strategy. That is no longer the case, using methods like these would sound the death knell for a gaming chair manufacturer.

Note that these methods should be ignored, they still have a place if used in conjunction with a well-thought-out strategic marketing strategy.

The likely gaming chair customer will be a younger person, who spends more time in front of their computer than in front of the television, and in some cases might never have even picked up a newspaper. The marketing strategies that gaming chair manufacturers use need to appeal to this demographic.

Instead of traditional methods, gaming chair manufacturers use social media and influencers, live events, and affiliate marketing methods. These are the strategies that will get them interacting with their potential customers. Let’s look at how these can be utilized.

Influencers: – A massive percentage of potential customers for gaming chairs are millennials. These influencers have huge followings on multiple social media platforms and can in just about any niche you can think of, and some you wish you hadn’t thought of! Getting influencers to endorse your product is akin to the old celebrity endorsement brought into the 21st century.

Social Media: – Not just advertising on Social media but having an active social media presence where you can interact with customers and showcase new products, run competitions and giveaways. Social Media is an increasingly powerful tool when it comes to marketing.

Live events: – Rather on hold at the current time, but nothing is surer that the moment restrictions start to lift, and gaming events begin again, the chair manufacturers will be highly and visibly involved.

Professional Gamers: – Having a professional use and endorse your product is one of the oldest tricks in marketing.

Can Gaming Chairs get Better?

Put simply, yes. If a manufacturer wants to succeed in the market, they are not going to do so by sitting on their laurels. Because you can bet your bottom dollar that their competitors aren’t sitting on theirs. Market forces are what drives innovation and those manufacturers that don’t innovate can quickly find themselves sitting on the sidelines.

If you want to see how quickly the market changes and innovates just have a look at the seats from 10 or 15 years ago, they were nothing more than glorified office seats with a bit of bling and some extra padding.

Technology moves on and people’s expectations move on as well, there is no doubt that in some secret chair laboratory, men with clipboards and white jackets are planning the next generation of gaming chairs.

Seats are now on the market that incorporates cooling gels and fans, that vibrate as you clatter over the curbs in your racing game. That can massage your back and neck as you play.

Ergonomics has improved and will continue to improve. Serious gamers spend over three times as long sitting in their chairs as the average 9 to 5 office worker. Comfort in chairs has improved with each generation and so has the science behind keeping you comfortable and healthy at the same time.

This is a trend that is commendable, not just for the gamer but for the long-term health of the industry. After all, it wouldn’t be good to discover in twenty years’ time that the current generation was a generation crippled with back and leg problems. Not good for humanity and certainly not good for an industry that would suffer a barrage of litigations.

Gaming chairs have come a long way over the last few years, and with a healthy and growing market that improvement in the quality and functionality of their product will only continue. 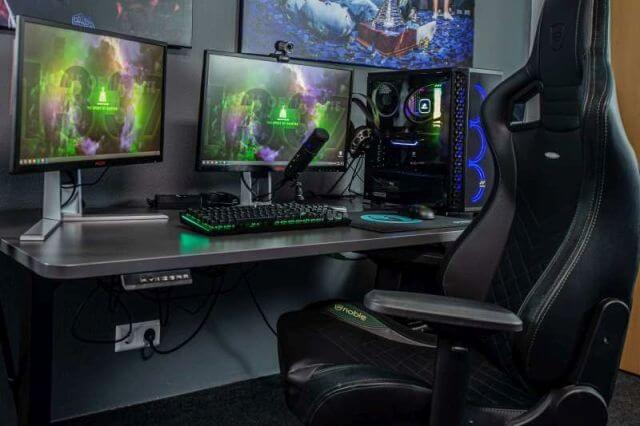 A healthy market drives innovation and amongst the features that gamers can expect to see in the next generation of gaming chairs include: –
Lighting: – Most gamers have already got illuminated keyboards and controllers; chairs are set to follow with many manufacturers now looking at integrating smart lighting into their chairs.
Seat Recognition: – Seats that know when they are in use have a multitude of uses, including pausing your work or play when you get up from it. Or knowing when to wake the PC up as soon as you sit down. This technology is one that will grow as OS manufacturers and game designers start to unlock its features.
Improved Ergonomics: – Each generation of chairs has improved in this area as the understanding of the importance of posture and what is a good posture improves.
Improved Materials: – While some people like leather chairs and are quite happy to stick with that, increasingly manufacturers are using more exotic materials as they seek to build that perfect chair. Materials that are super soft or utilize cooling gel are coming to the fore. And the cushioning material is set to undergo a revolution as more comfortable memory foams are integrated into designs.

The gaming chair industry will always be an innovative field. It goes with the territory, their marketplace is composed of customers who use the latest technology, customers that love innovation, that want to be at the forefront of the gaming scene. They expect it, even from their chairs.

It is this thriving marketplace that is driven by innovation and great design that ensures that gaming chairs are here for the long term.